skip to main | skip to sidebar

Some members of this government believe that they do things a lot better in Scotland. They do not say it but their policy says it for them. Scotland has a different legal system and the rules relating to the conveyancing (legal transfer) of properties are different. Indeed, people often say that they are quicker and easier in Scotland.

The buying and selling of property is something that MPs think that they understand. There
must be thousands of MPs surgeries full of people complaining about the slowness of the process.

New Labour decided that they could speed the process up and make us more like Scotland.

The idea was simple. The seller would buy a pack in which there would be a survey, searches and home condition report. Then the buyers solicitor would be handed this document and get on with the purchase.

This seemingly simple idea was greatly flawed. Indeed, it carried with it many of the abiding sins of New Labour, which can be summarised as follows:-

A superficial understanding of the process

Common law is adversarial and the law of property has a golden rule “caveat emptor” (Let the buyer beware). A solicitor acting for a buyer is going to be very wary of a survey produced by a seller’s solicitor. In addition, most local authority searches run out after three months. It is likely that the buyer will have to get his own survey and so two surveys will, most likely, have to be produced (three if you count the survey required by the purchasers mortgage company). So the new process which will require an extra survey and may need an extra local authority searches. This will slow things down. not speed them up.

No understanding of history

The Law Society of England and Wales (which regulates solicitors) introduced a scheme called “Transaction” in the early 1990s. This scheme was very similar to HIPS, in that the searches were provided by the seller. Also, the seller provided answers to standard enquiries. It did not speed up the process. New Labour are incapable of learning the lessons of the past.

The professional organisations (e.g, The Law Society) supported HIPs as an idea for a long time. This was because they saw HIPs as the way in which their members might wrest control of the conveyancing process back from the estate agents. At the moment sellers go to estate agents who then normally introduce them to solicitors. The estate agent charges about ten times more than the solicitor but stupid solicitors still send clients bills which include the estate agents fees and so the stupider clients associate the huge estate agents bill with his solicitors bill. In fact deregulation of the conveyancing market has meant that legal fees are about the same as they were in 1970. The same sum not the same value. The Law Society saw the introduction of HIPs as a way of controlling the process, as new sellers would need a HIP and might go to their solicitor for it. A person who did this would probably use the solicitor who provided the HIP. They set up a scheme whereby solicitors could buy HIPs from a third party under Law Society sponsorship. The Law Society would not launch an attack on HIPs in these circumstances and neither would the other professional bodies. So, whilst the Law Society and other bodies criticised the details of HIPs, they would not attack the whole concept. Some estate agents realised that they might lose control of the process and attacked HIPs but no attacks hit home until the television property experts started to unpick the concept. New Labour are incapable of seeing how a policy will be distorted or affected by commercial interests.

A belief that they could produce instant experts

There were never going to be enough newly trained experts to deal with Home Condition Packs, a central part of the HIPs process. New Labour were asking for a new profession to spring out of the ground. Unsurprisingly they were “made optional” (read scrapped) but the Energy Performance Certificate remained a mandatory item. Again, there were never going to be enough people to do this work and this is what led to the collapse of HIPs as a general concept for the whole property market and its restriction to four bedroom houses. New Labour do not understand the concept of expertise and think anyone can be an expert.

HIPS were to be used for another purpose. This was to ensure compliance with a European Union Directive involving energy assessments of properties. New Labour could say that they were speeding up the process and they would actually be implementing an EU directive. The process would also help with council tax revaluation. New Labour are not honest about their aims.

Michael Gove MP led a very effective campaign to emasculate HIPs but a face saving compromise is coming in tomorrow. HIPs will be for houses of four bedrooms and above.

The Conservative Party needs more such campaigns and a unit which will identify mistakes of the future. It needs some intelligence. It does not need bickering idiots attacking the leadership.
Posted by M. Hristov at 15:53 No comments:

“The past is a foreign country. They do things differently there.” The opening of “The Go Between” by L.P. Hartley. We have forgotten the enormous changes over the last 30 years. The landscape was just so different back in the time of “Life on Mars”. I have to pinch myself to remember the Miners Strike of 1984 and 1985 and yet sometimes the memories come streaming back. Did I really hear a man, who is now a pillar of the establishment, justifying the death of David Wilkie all those years ago?

N.B. David Wilkie was the taxi driver killed by miners in South Wales. His crime was driving working miners to work.

Did we really think we could all be killed by the Soviets? It all seems a bad dream. Now, in the memorable words of a staunchly anti-communist former government minister, Dennis McShane (not, I hasten to add, the aforementioned pillar) the maggots (he meant Eastern European communists) have become respectable business people.

We have become fixated on relatively trivial matters. Remember that when you start to panic about the latest fad or fashion. Remember that when they tell you that we face the greatest threat that we have ever faced.
Posted by M. Hristov at 18:18 No comments:

One of the great taciturn men of politics, Clement Attlee, used to sum up matters in a wonderfully terse manner. Never more so than when he told the loquacious Harold Laski that “A period of silence on your part would now be welcome.” A period of silence on the part of Lord Kalms and Stuart Wheeler and, indeed, all other critics of David Cameron, would now be most welcome.
Posted by M. Hristov at 17:38 No comments:

I do wonder why no one has suggested that all “Bowsers” should be guarded by a soldier sworn in as a special constable. This would stop vandalism and ensure the water was distributed fairly. The reason for swearing in the soldier as a special constable would be to allow him or her to arrest miscreants. Oh dear, am I getting too old and will I be demanding that they send in the tanks instead of doling out ASBO’s or is this idea commonsense?
Posted by M. Hristov at 15:25 No comments:

I liked the Conservative “Haynes Manual” entitled “Breakdown Britain”. It is the ideal size for reading on the toilet and so it will be read (but probably more by men than women). Chapter 3 “Loss of power - Personal Debt” refers to “Individual Voluntary Agreements”. They are, in fact, “Individual Voluntary Arrangements” (“I.V.A.’s"). It is a shame that this error occurred because people who are in I.V.A.’s are not likely to vote for the incumbent government and so are natural Conservative voters.
Posted by M. Hristov at 15:01 No comments: 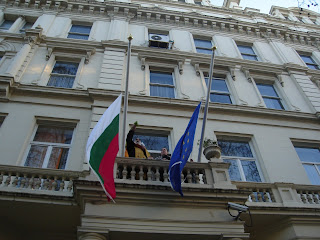 A new year and a new dawn. Bulgaria joins the E.U. but has Bulgaria been used by the French in the eternal battle for influence?
Has Sarkozy exploited a potential tragedy to obtain international kudos for the revival of the Franco-German axis?
Is he trying to undermine newfound British influence?
Mme. Sarkozy has saved the Bulgarian nurses ridiculously and dangerously accused of infecting children with HIV but did she really do this? Or did she capitalise on a long process of negotiation?
Posted by M. Hristov at 13:26 No comments: